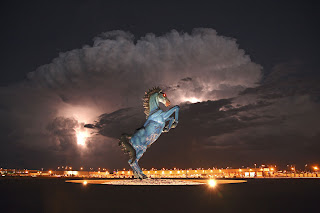 Denver Airport in Colorado Springs has been the topic of debate among Truth Seekers and Conspiracy Theorist’s alike since the erection of the new Airport. Although Truth Seekers and Conspiracy Theorist’s don’t normally like to be referred to in the same sentence, on this matter they are fairly untied in opinions.
The airport I am referring to in this article is Denver Airport, which was built in 1995, despite the fact Denver already had a fully functioning airport called Stapleton International Airport. This is one of many interesting facts which has initially attracted groups such as the fore mentioned. Ordinarily when a new construction is built to replace another, it is either due to the fact the previous structure is faulty or that the new proposed structure needs better technology or in the case of an airport, more runway space. None of this was in fact the case with Denver Airport. Stapleton was fully operational with no underlaying issues and the replacement airport had less runway space nor did it sport an fantastic new technological advancements over the previous. However having said all that, the new Denver Airport did have an enormous amount of dead space surrounding the Airport which is owned by the Airport and has no plans in place for extra runways or parking etc. One final aspect to the actual construction of Denver Airport, from an arial perspective or satellite image, the entire complex forms the shape of a giant Nazi Swastika, which understandably does not sit too comfortable with some people. 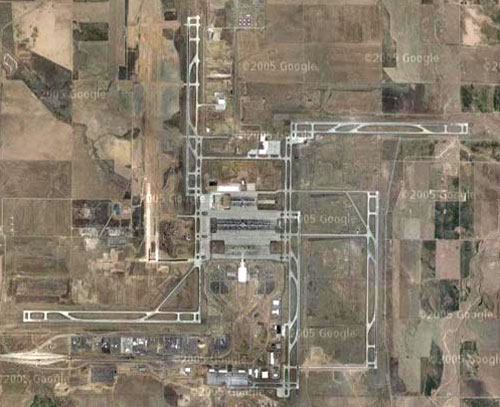 Perhaps the single most talked about feature of the new Denver Airport, and this is only due to it’s blatant visibility as there are many other disturbing features; is the collection of protected murals.
In plan site of passengers departing and entering the airport, there are approximately four giant sized wall murals depicting horrifying images. Many people have expressed the fact that airports for the vast majority of people, are intimidating places at the best of times, to be bombarded with such explicit images of death before boarding an airplane is boarder line sadistic. Are these murals one mans warped artistic mind running wild, or are they a visual representation of plans laid out by the NWO (New World Order) who many people feel are the true architectures of Denver Airport. As you can see from the images, there are many interpretations one can see within the murals. The image of what looks to be a Russian Stormtrooper wielding an Arabian Sword in one hand as it slices through the Earth leaving devastation and destruction in it’s path and an AK-47 in the other hand. It is worth noting about this particular image, the sword appears to be slicing through two tower blocks, pretty reminiscent of the Twin Towers disaster in 9/11. Whats more frightening about this image is that it was painted well before the 9/11 tragedy. The artist responsible for the murals is Leo Tanguma, who to the best of my knowledge has never actually held an interview explaining the meaning of the murals, if in fact there are meanings. 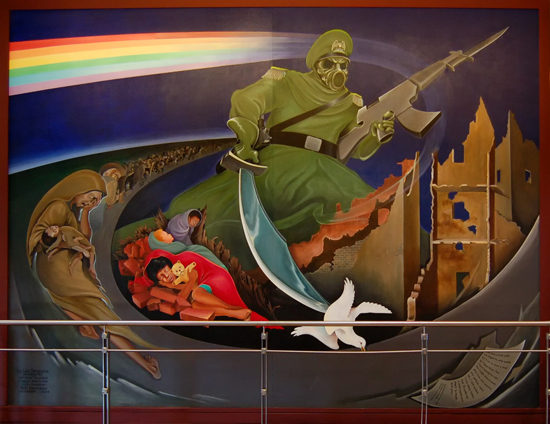 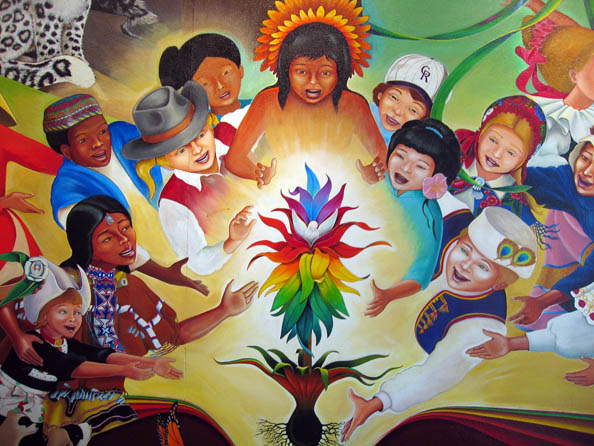 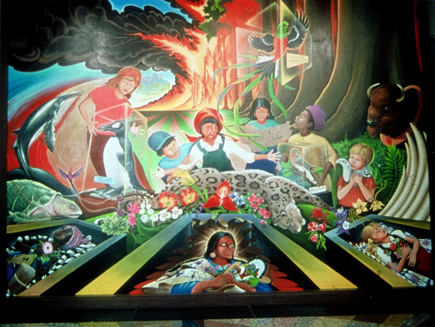 As I have already briefly mentioned the New World Order and their involvement behind the Airport, let me just explain a little bit about this group. Many people believe and with good reason, that an elite group of individuals run the world and we are not alluding to simple straight forward individuals such as President’s, Prime Minister’s and Monarchy’s but much more influential destructive people than these. The individuals who really pick and chose governments throughout the globe, people who hold much more power and fare grater evil minds than the lunatics we openly call our leaders. It is thought that the New World Order group need to reduce the population on this planet by quite a bit, and by that I mean a reduction of billions, lives that are only seen as parasitic to the globalist mentality and therefore totally expendable.
On entering Denver Airport you are openly welcomed by a large Cornerstone, which has engraved on it the following message. “New World Airport Commission Contributors”. There is other information on the stone however this particular phrase is of special interest as there is no such organization as “New World Airport Commission Contributors”, and so could this be a metaphor for the New World Order, or perhaps a secret building block in their plan for global domination? 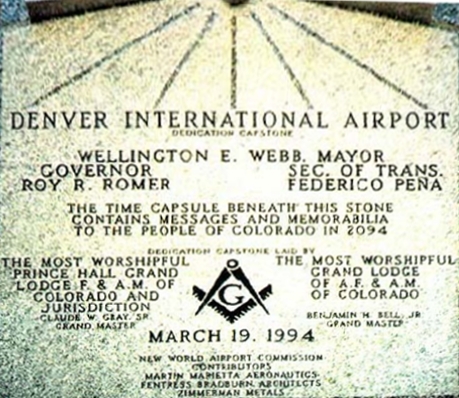 On further investigation of the airport the periodic table symbol for gold and silver (Au Ag) appears throughout different areas of the airport, however certain individuals think it represents something far more sinister. One of the main sponsors of Denver Airport is also supposed to have discovered a new deadly strain of the Hepatitis B Virus also known as Australia Antigen, which also has the (Au Ag) symbol. Obviously due to this people assume the symbol with the (Au Ag) represents the method on which the New World Order are to reduce the population to the preferred size.
The final piece of the puzzle as far as Denver Airport is concerned is the massive underground network that many local people have watched materialise over the last few years or more. Vast underground buildings and a network of tunnels connecting have been witnessed and when the Airport officials are questioned or even people working on the construction asked about it, they simply reply that they are not permitted to talk about it, or ignore the question altogether. Within this vast network of underground tunnels and buildings made of concrete, sprinkler type systems have been installed, again when people inquire about a sprinkler system installed in a non flammable environment, blank expressions are returned. All of this adds fuel to the theory that when the New World Order kickstart their mission to overthrow the globe, that Denver Airport’s underground networks and others like it around the wold will be used to contain citizens under Martial Law. Once they have been rounded up and herded into these complexes, the so called sprinkler systems will become apparent. Much like the terrible concentration camps of Nazi Germany, these sprinkler systems will pump through the deadly Hepatitis B virus (Au Ag Australia Antigen)

As with all Truth Seeking Theories or Conspiracy Theories of this nature, there is always another group who are more than willing to explain all the demonic type actions I have explained in this article. For example while (Au Ag is partially correct in representing Australia Antigen) after I conducted my own research on this matter, I discovered that it is only partially right and that the correct abbreviation for the strain is (Au Ag-Ab), so one must ask has this been left off to fit someone else’s theory. Also as far as the sprinkler system, regardless of the environment being concrete and pretty much non flammable, in all underground establishments oxygen is constantly pumped and pure oxygen like this can cause massive potential for fire and this could be what the sprinkler system is in place for.
As for the other things such as the shape of the complex and the terrifying murals, I don’t have an answer as to why they have been situated at an airport in the intimidating fashion they have been sited. It has also been reported on various occasions that high profile individuals such as the British Royal Family and many others in this realm of status, have purchased property close to the facility. It is of course no secret, that not far from Denver Airport, in the Cheyenne Mountains of Colorado Springs, NORAD (North American Aerospace Defence Command) are stationed deep within and under the mountain's. It is quite obvious to the reasoning behind this, NORAD are responsible for maintaining control over Satellite's placed in space by America, NORAD monitor much further than the skies for the possibilities of foreign attack. They are also the last line of defence in terms of command centre should we ever face a Nuclear Holocaust
For me personally, I am always open minded to pretty much everything, I think to shut off and ignore what is going on around us, is to be ignorant and that is neither helpful to me as an individual or to other people around me. However I do try to take a logical approach on matters, I don’t always get things right, but so long as I have researched the matter for myself, then I know I am not simply being lead by the few who want it to be like that.
I would love to know your thoughts and opinions on this matter and if you have read about this before or simply about the idea of a New World Order in general.
Posted by Unknown at 11:32 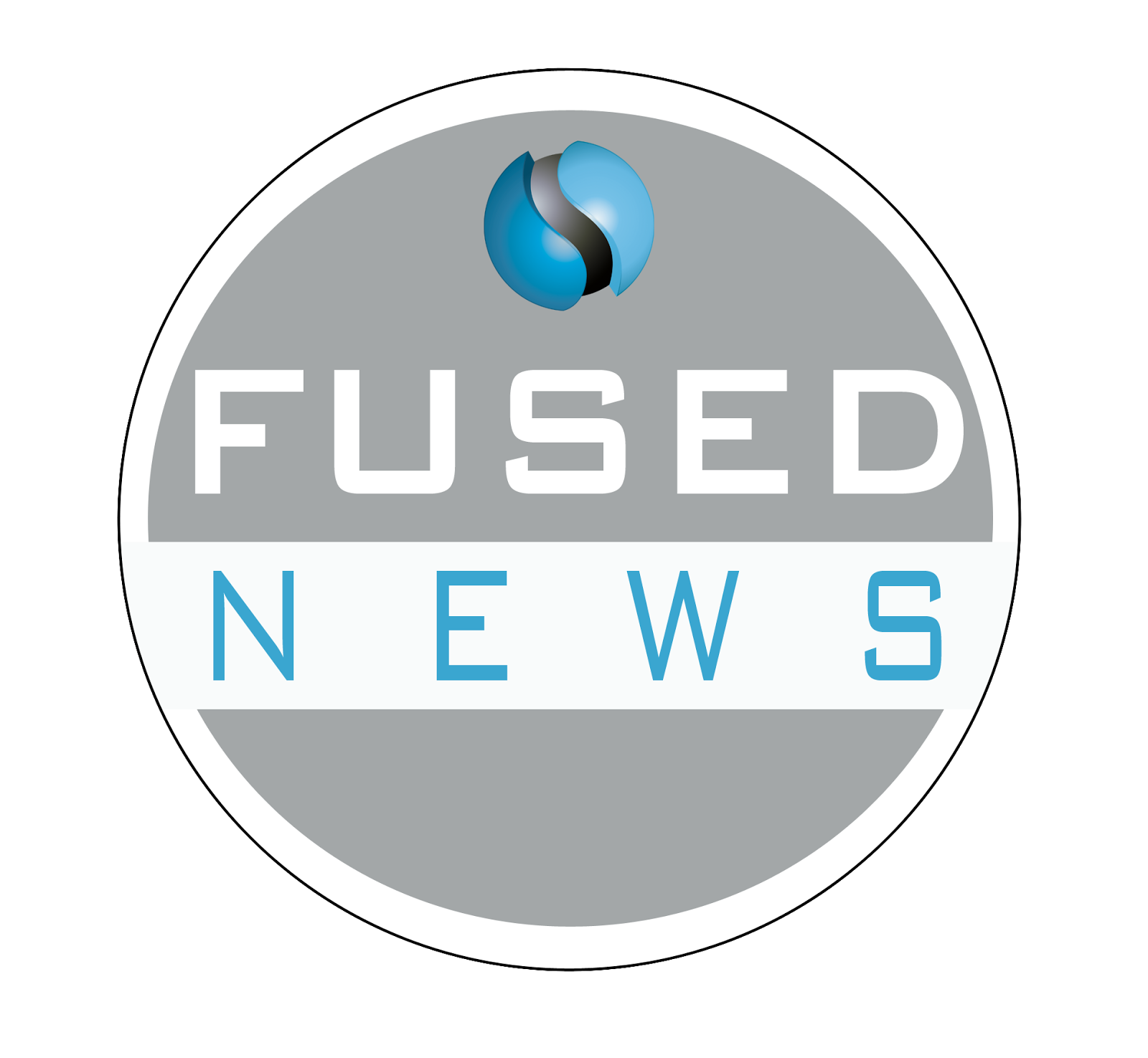